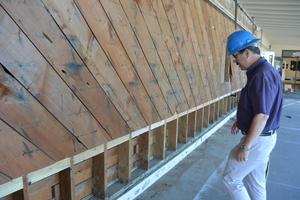 The district has won a total of about $6.26 Million in grants since 2016 from Business Oregon for four separate projects covering all three schools

BROOKINGS — The Brookings- Harbor School District will receive $1.76 Million in a new seismic rehabilitation grant from the state to retrofit the Azalea Middle School gymnasium, as announced by Business Oregon's Infrastructure Finance Authority on April 8, 2019.

The program provides funding for construction work on schools and other critical public buildings to better prepare the structures to withstand a major earthquake.

With the newly announced $1,762,199 in seismic rehabilitation support, the district has won a total of about $6.26 Million ($6,259,799) in grants since 2016 from the program for four separate projects to upgrade the older section of Kalmiopsis Elementary School, most of Azalea Middle School (with the exception of the gym), the Brookings-Harbor High School gym and front section of classrooms, and now the AMS gym for seismic safety.

“Economic development starts with strong infrastructure and thriving community assets,” said Business Oregon director Chris Harder. “This program helps with both while ensuring Oregon communities have safe buildings as we prepare for a seismic disaster.”

The Seismic Rehabilitation Grant Program is a state of Oregon competitive grant program. This is the fifth round of funding Business Oregon has awarded under the program. With this round, now 224 schools and 101 emergency services buildings have been awarded more than $382 Million in funding for improvements since the program's first awards in 2009. The program was created by the Oregon Legislature in 2005 and transferred to Business Oregon in 2014. BHSD was the only South Coast project to receive a grant from this round of funding.

“These grants provide a tremendous boost to the school district and community, with the first priority being safety,” said Superintendent Sean Gallagher, who has overseen multiple seismic retrofits in his career.

The project will do more than shore up the schools as emergency shelters for the community in case of a disaster such as an earthquake, tsunami, fire or severe storm. Additional benefits of the seismic retrofit projects are new structural improvements such as new siding, new roofs, new paint, and added energy efficiencies.

“A seismic retrofit project will add to the lifespan of a building by around 50-60 years saving taxpayers millions of dollars in building maintenance and/or replacement costs,” Supt. Gallagher said. “The district appreciates everyone’s patience as we move forward with these exciting projects. There is one more application for the high school in the works that will likely be re-submitted for consideration at the next available funding round.”

Design and strategic planning for the new middle school project will begin this summer with construction tentatively planned for summer 2020. The construction phase of the BHHS gym seismic safety retrofit funded through a previous grant is already underway and expected to be completed by the start of the 2019-20 school year.